In order to enable Rescue or stabilisation modes you have to set Stabi/Function to a desired option. When Disabled, no special function will be used.

It is possible to set a different functions between Banks.

From version 2.3.0 it is possible to activate the Stabi/Function in the two ways:

For normal flying a positive Gyro Gain is used. To activate function which is selected in the parameter Stabi/Function it is necessary to set a negative gyro gain.

Gyro Gain is still used to set the rudder gyro gain. At the same time, positive or negative value will determine if selected function is inactive or active. So it is important to set the gyro gain properly for both normal flight and selected function. Usually same, but opposite values are fine (for example +60%/-60%)

The function is active as long as the Gyro Gain is negative. Then the normal flight is engaged again. Because unit allow to set the Gyro Gain by your transmitter or directly in the software, you have two options how to do that.

1.1 In the transmitter (common)

This is the common way how pilots are configuring the Gyro Gain. It can be easily programmed for a two-state switch. For the Rescue a momentary switch is the best. Usually you can find the configuration in the GYRO menu in your transmitter. For the beginning you can set:

This will set a moderate Gyro Gain and allow to select which mode will be used anytime during the flight.

Do not forget to set the gains accordingly for your model. Also make sure that the Gyro Gain function is assigned in the software.

When you do not want to or can't set your Gyro Gain in the transmitter, you can do so in the software. There is only requirement to unassign the Gyro Gain function in the General/Channels window. This mean that transmitter have no control over the Gyro Gain. Instead the value is configured by the Sensor/Rudder Gain parameter.

There is disadvantage that in order to activate selected function, you have to set a negative Rudder Gain. This can't be changed during the flight normally. On the other hand, you can use a Bank Switching feature and program a different Function and Rudder Gain for each bank. 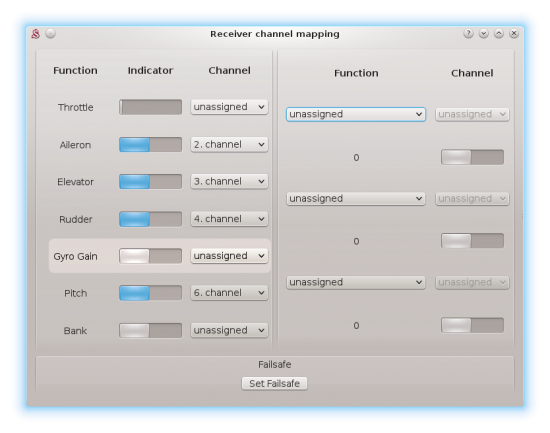 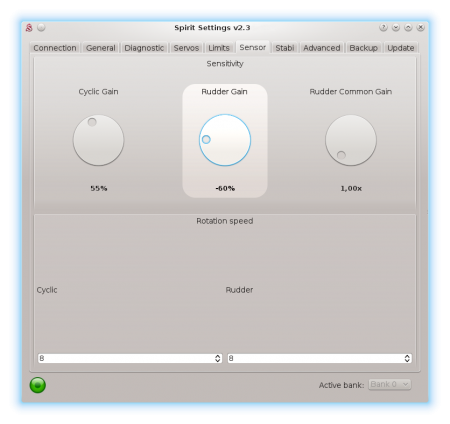 Function in the Stabi/Function parameter will be activated by a dedicated channel selected in the General/Channels. 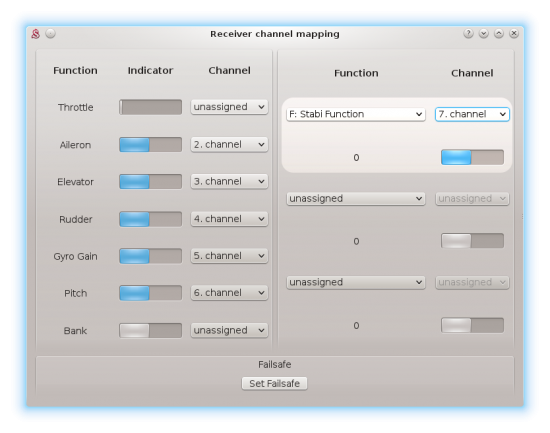 Following table is describing how selected Channel can activate the Function.